We surprised Christy Eugenis on Thursday. Arriving a bit early for our scheduled meeting to discuss Design Week, photographer Mitch Hose and I wanted to get a few shots for a blog piece as well. But Christy, a former photo stylist, videographer and fashion show producer, took it in stride.

I would have picked up a bit more had I known there were going to be photos! Ah well, let’s do it,” she says with a smile.

Christy Eugenis stands at her front door, carved by artist Tom Cramer, with its handle from a 1954 Chevy Bel Air hood ornament she found in a local salvage shop. The door’s design was inspired by the shapes and forms of both natural and urban landscapes.

The midcentury home is truly a masterpiece. Christy will open her doors for ARCIFORM’s Design Week Open House on Thursday, April 19th from 4-7pm. “Portland sculptor Alisa Looney will be here to tell us about her metal window screen, and Christiane Millinger will join us to share about the rugs she sells in town,” Christy tells me.

The custom window screen by Alisa Looney and hand-carved door by Tom Cramer make the home stand out as a midcentury masterpiece that showcases art.

Christy’s latest endeavors include the remodeling of her home and operating several extended-stay vacation rentals. “I’ve enjoyed coaching some of my single friends on how to increase their income by investing in real estate and creating interesting environments for guests.”

Christy will also be speaking at ARCIFORM’s Home Design Workshop about ADUs and Short-Term Rentals on Wednesday, April 18th from 5-8pm. I take in the expansive, bright and calming space. The ceiling, clad in fir tongue & groove paneling, is perhaps the most impressive element on the main floor. The roofline, angled slightly upward, gives the space an airy, urban-nature feel. 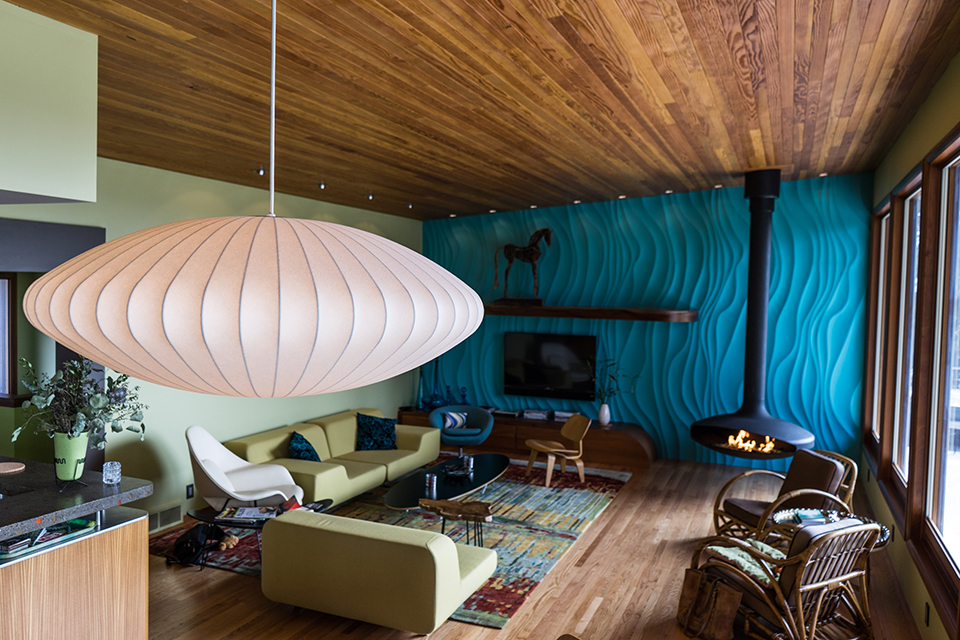 A George Nelson Saucer pendant, walls in Hearts of Palm green and custom-mixed turquoise blue and warm-toned wood give the home the urban-nature/Palm Springs feel we were after.

“The first concept for the new roofline had the original gable slope on the east side, and the west side lifted up,” Christy explains as she holds her fingers together showing this angle.

But instead ARCIFORM removed the entire roof, a giant wood beam was craned into place at the center of the structure, and the roof rebuilt around this, making it the most significant part of the house remodel.

The next thing I note is the blue textured wall with curved lines. It looks like an ocean. 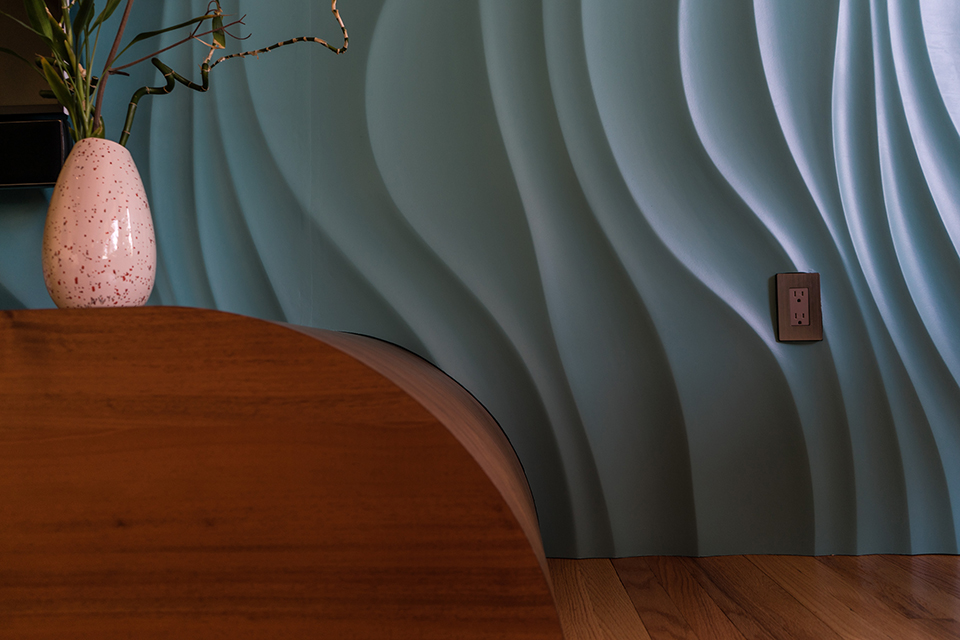 A custom mahogany cabinet by Versatile Wood Products curves into the wall sheathed in panels by Textures-3D.

“I love the architecture and color of Palm Springs, which influenced the re-imagination of our Portland home.” My favorite thing about their home is all of the color.

“We live in Portland. Why would you want more gray?!” Christy exclaims. “Few people are doing color these days, it’s all grays. This is so much fun,” Anne De Wolf agrees. Anne worked closely with Christy and Stan on the design of their remodel. The project included the new roofline, large windows and doors facing their city view and the back deck as well as the remodel of the interior with exception of the kitchen, which had been done only a few years prior. The floor plan is mostly original, with walls moved only to create the master bathroom and reconfigure the basement’s laundry room and bathroom.

Christy and Stan enjoy collecting art. The driftwood horse on the mantle by Eastern Oregon sculptor Brenna Tyler  was purchased in Joseph while doing Cycle Oregon, and also works as their Christmas tree in the winter. As we walk into the master bedroom I admire the framed artwork above her bed. “This textural piece was the first artwork I ever purchased, from Victoria Frey at  Quartersaw Gallery in 1990. It’s by Oregon artist Ken Hunt.” It’s handmade paper with rough edges and deep blues is truly captivating. 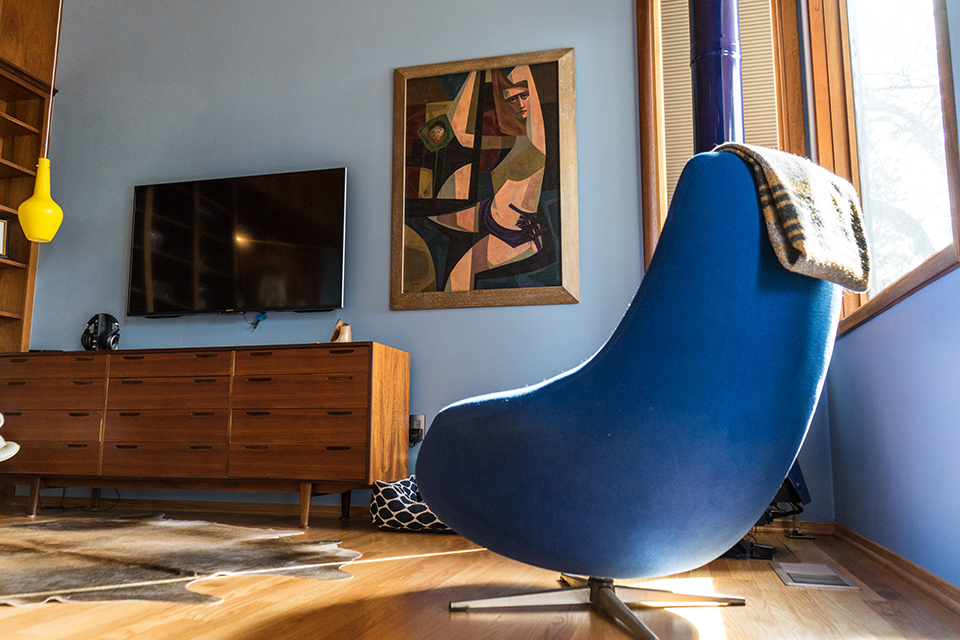 “Blue is my favorite color,” says Christy. “It’s one of nature’s best colors. With all of the wood paneling ARCIFORM added, it feels so wonderful in this space.” The wood paneling and built-in shelving is truly magnificent, looking just like the midcentury spaces so sought-after today.

On our way out of the bedroom, I glimpse the master bath with pebble flooring against tile. Here you see the artistic metal window screen from the inside. It’s a whole new way of experiencing it.

There is a whole room dedicated to the closet. It’s clear Christy is not only passionate about art but also about fashion as she shows us a Pucci dress. “We took out a wall to expand this space so Christy and Stan could have a closet with a dressing area and a daybed, in case visitors cannot use the stairs down to the guest rooms,” Anne comments.

Next, we head downstairs, into a fully refinished basement with a lounge room, office, kitchenette and bar. ARCIFORM made the lounge room cozy with a new fireplace surround and more connected to the back yard with a wall of windows.

Their style continues on this level with a pendant light and matching lamp shade gifted to Christy by her friend and midcentury collector Ron Wallace of 3 Monkeys Boutique. 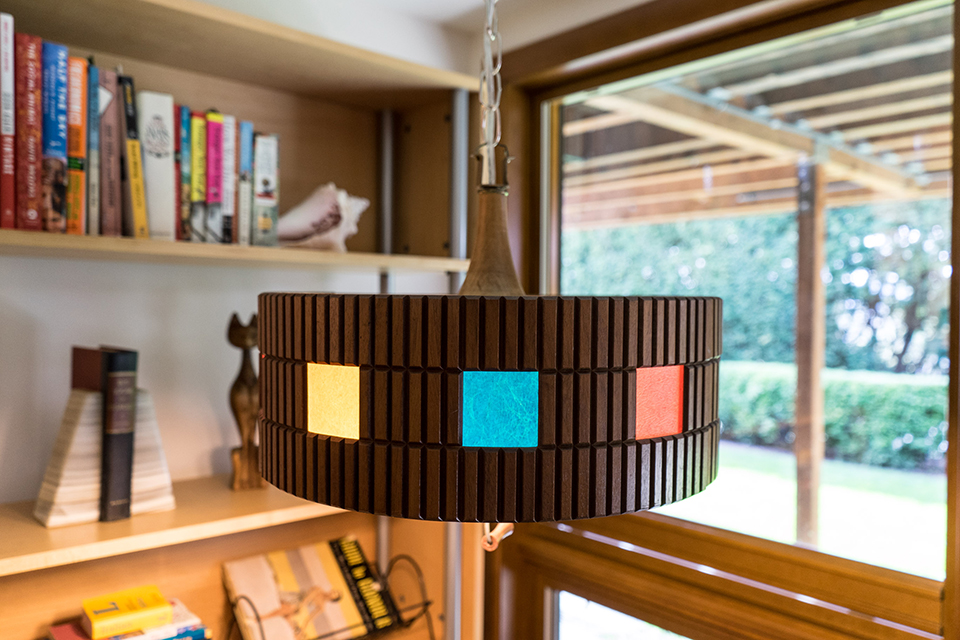 As we stand in the backyard and feel the sun for a bit, Christy recollects the evolution of the deck. “When we bought the house in 1994, there was only a small balcony off the master bedroom, which was transformed to a wonderful L-shaped deck with metal railings Richard Brown designed for us. Over the years we found it was a bit too small. Now the roof carries out over a larger deck for a dramatic effect over the outdoor dining area.” ARCIFORM was able to reuse the existing deck railing by making only a few changes.

Feeling the sun on our backs while talking about how the deck was done.

Christy describes for me her journey into creating video biographies. The oil painting behind us is by her grandmother, who inspired her to begin documenting people’s lives through video. The Versatile Wood Products custom screen adds ’60s flavor.

“The fully-refinished basement is all ready for us as we get older. We’ll just live down here and our nurse has a kitchen to cook in for us while we rent the upstairs out,” says Christy.

Want to join the discussion?
Feel free to contribute!

The preliminary design for this spacious main bath

As designers, we scour high and low to source beau

Happy Friday to you all. Today's peek from Design

A Night to Remember
Scroll to top